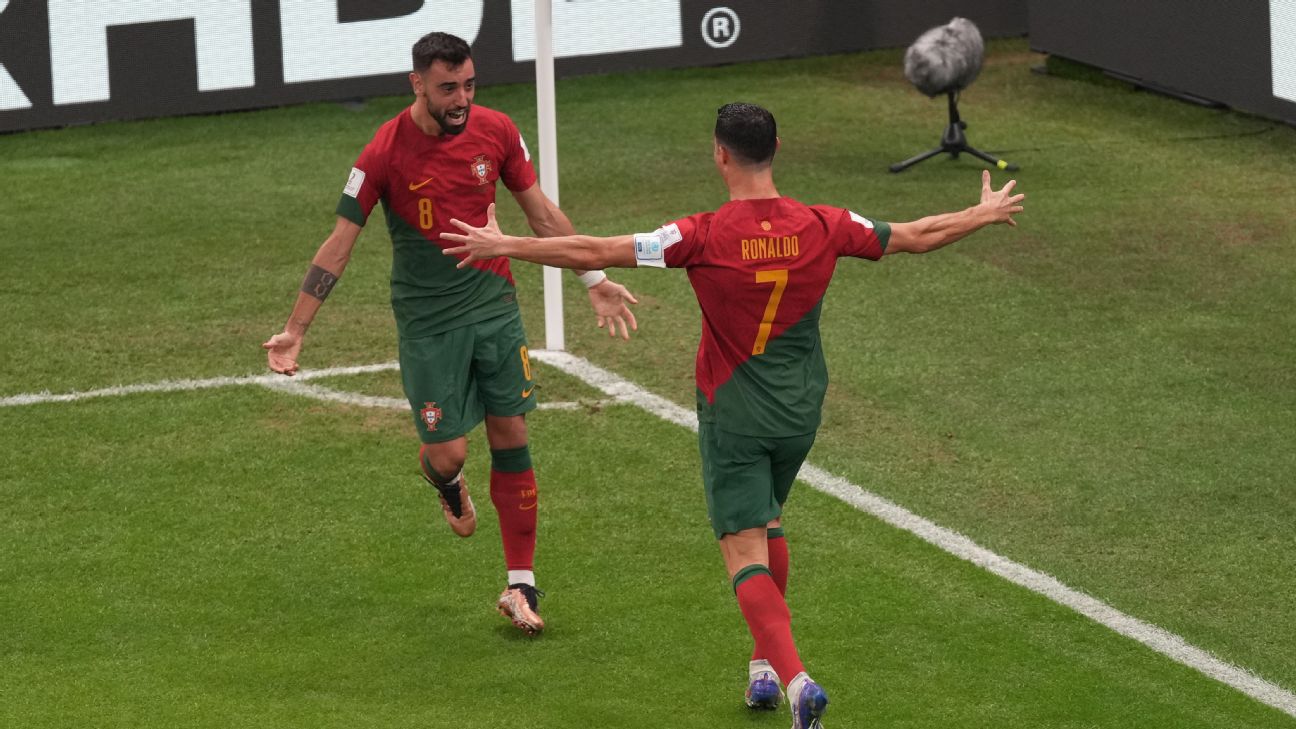 LUSAIL, QATAR — Bruno Fernandes backed Cristiano Ronaldo’s claim to have scored the opening goal in Portugal’s 2-0 World Cup win against Uruguay, saying he thought his Manchester United teammate had headed his cross to register the opening goal in Lusail Stadium.

Portugal became the third nation at Qatar 2022, after France and Brazil, to secure a place in the round of 16 after making it two wins from two in Group H by beating a disappointing Uruguay.

But the identity of Portugal’s first goalscorer in the game continues to be in doubt with both Fernandes and coach Fernando Santos unable to clarify whether or not Ronaldo provided the decisive final touch.

– Ogden: Fernandes, not ‘sneaky’ Ronaldo, leads Portugal into knockouts
– World Cup VAR: Why handball call on Uruguay was totally wrong
– World Cup 2022: How every team can reach the round of 16

Fernandes’s 54th minute cross initially looked to have been directed into the net with a glancing touch by Ronaldo’s head, but television replays suggested that the 37-year-old did not touch the ball.

Fernandes was announced as the goalscorer on the big screen in the stadium, despite Ronaldo celebrating as though the goal was his, which would have taken him to nine all-time World Cup goals for Portugal and level with legendary former striker Eusebio.

But speaking after being announced as Player of the Match, Fernandes admitted even he didn’t know whose goal it was.

Does Ronaldo get a touch on this goal? pic.twitter.com/SdW0v6NjCZ

“I celebrated [the goal] as if it had been Cristiano’s goal,” Fernandes said. “It seemed to me that he had touched the ball. My aim was to cross the ball for him.

“We are happy with the victory regardless of who scored. The most important thing is that we achieved our aim which is to be in the next round.”

For now at least, the goal has been credited to Fernandes, who has now registered two goals and two assists for the Euro 2016 winners in Qatar.

And when asked whether he knew who had scored the opening goal, coach Santos was also unable to shed light on the identity of the scorer.

“I think it was a great match,” Santos said. “Our team played very well and the rest, for me, does not matter.”