Video Assistant Referee causes controversy every week in the Premier League, but how are decisions made, and are they correct?

After each weekend we take a look at the major incidents, to examine and explain the process both in terms of VAR protocol and the Laws of the Game.

The return of Howard Webb

If Howard Webb could have mapped out the first 20 games of his tenure as the new head of Premier League referees, it probably wouldn’t have looked much different to this. After 3½ troubled years for VAR in the Premier League, the two rounds of matches played over Christmas went relatively calmly.

But make no mistake, Webb has no magic wand and having held just one get-together with all Premier League referees (the one-to-one meetings will come early in the New Year) his mere presence isn’t going to fix all the ills.

Webb has spoken of his desire to improve the transparency of decision making and, while that may take some time to come to fruition, another of his aims was seen on the first day of fixtures after the World Cup break. Webb wants his referees to have the confidence to stick to their decisions at the pitchside monitor; referee Andy Madley duly obliged by correctly turning down a VAR review to disallow a Fulham goal. It comes on the back of six incorrect VAR interventions in the first part of the Premier League season, all of which involved a referee being sent to the monitor and changing their own decision.

Webb has given a series of instructions to try to improve standards in England — including asking the VARs to also back their own judgment to cut down on missed interventions, rather than relying too much on what the referee has seen. It’s early days, but a perceived lack of confidence and conviction — either on the pitch or in the VAR room — had been an issue in the Premier League.

What happened: Christian Pulisic broke into the area in the 12th minute and shot well wide, but was falling as he did so. The United States star turned to referee Simon Hooper appealing for a penalty for a pull by AFC Bournemouth defender Adam Smith.

VAR review: A lot of supporters would expect this to be given as a penalty. There was clear holding of the shirt by Smith, but that alone does not constitute a foul. The question is whether it was prolonged or of a sufficient nature to prevent Pulisic from being able to take his shot?

The referee didn’t feel there wasn’t enough in it and the VAR, David Coote, decided there wasn’t a clear and obvious error. That Pulisic appeared to go to ground a couple of strides after the pull won’t have helped his case.

It was a huge risk taken by Smith and could easily have resulted in a spot kick. If the referee had given a penalty, there’s no chance the VAR says that should be overturned.

Judging the impact is always a balancing act, and it was right on the borderline.

We saw an example of shirt pulling at the start of the season when Wolverhampton Wanderers’ Matheus Nunes held onto the shirt of Newcastle United’s Sean Longstaff inside the area. Referee Peter Bankes allowed play to continue and the VAR, Lee Mason, did not advise a review.

After the game the independent five-man panel ruled that the Nunes-Longstaff incident was a clear and obvious error, and the VAR should have intervened. The Pulisic incident isn’t as clear, with Longstaff having his shirt pulled away from his body, so the panel may agree with Coote for the Chelsea game.

What happened: In the 51st minute, Harry Kane looked to meet a cross from Ivan Perisic but went to ground against Brentford defender Ben Mee. The England captain wanted a penalty for holding but referee David Coote wasn’t interested and play restarted with a throw-in to Spurs.


VAR review: After we saw a series of penalties awarded at the World Cup for this kind of grappling offence, Kane was bound to be asking the question.

This is a different kind of incident to Smith on Pulisic, with Coote the referee for this game the day before he was on VAR duty for Chelsea vs. Bournemouth.

The two players come together as the cross is played over and, at one stage, Mee has his arm around Kane. That Mee quickly releases without a prolonged hold will have been important for the VAR. There also appeared to be a degree of holding from both players, rather than it simply being a case of Mee blocking the attempted run from Kane.

The VAR, Stuart Attwell, felt there wasn’t enough in it for a review at the monitor. With the Premier League’s higher threshold for VAR intervention, it’s very unlikely an incident like this will result in a penalty.

What happened: Marcus Rashford bundled the ball home in the 82nd minute, thinking he had doubled Manchester United’s lead at Molineux, but there was a possibility the ball came off his arm before it went into the goal.


VAR review: A simple call for the VAR, Darren England — and a classic disallowed goal of the VAR era. Rashford was very unlucky that the ball hit his arm after the initial save by goalkeeper Jose Sa, but it’s an automatic decision to disallow the goal.

It would be difficult for referee Robert Jones to pick up in real time, but should always be picked up by the VAR.

What happened: Fulham doubled their lead at Selhurst Park in the 71st minute through Tim Ream, but Aleksandar Mitrovic headed the ball onto his own arm before it fell to the USMNT defender to score. The VAR, Mike Dean, instigated a review to disallow the goal.


VAR review: This should never have made it to a pitchside VAR review.

There is a specific clause within handball guidance issued to referees that if a player deliberately plays the ball with this head, and it hits their own arm, it shouldn’t be handball even if the arm is away from the body. This is only overridden if the handball is a deliberate act, which is the reason Dean sent referee Andy Madley to the monitor.

Mitrovic was simply trying to head the ball, there was no deliberate act. An excellent decision from Madley to stick with his original decision. Perhaps Webb’s words about having confidence in your own decisions were in the referee’s mind when he was at the monitor, as he avoided an incorrect VAR intervention.

What happened: Brighton thought they had made it 4-3 through Kaoru Mitoma in the 89th minute, to set up a grandstand finish, but there was a VAR review on the buildup. 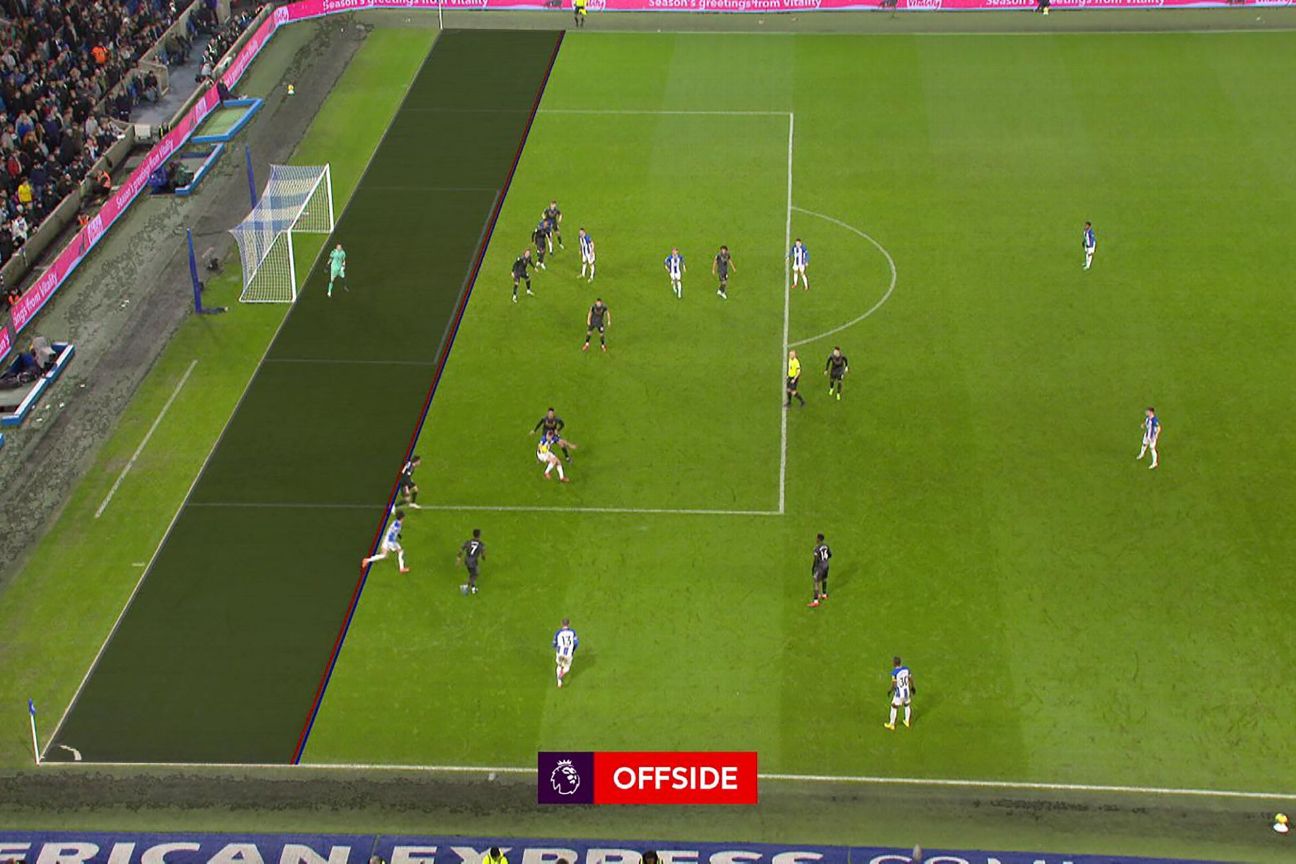 VAR review: It’s the kind of VAR decision fans really dislike: correct, but which creeps up on you without you knowing.

A throw-in went to Evan Ferguson, who made an attempt to control the ball but it simply dropped down; Mitoma ran over and picked up the loose ball, cut into the area and scored.

Mitoma was running back from an offside position, having offered himself to receive the throw, at the moment the ball touched Ferguson; the boot of his trailing leg was marginally ahead of the last defender.

The offside offense isn’t about advantage, it’s purely about the position of the attacker relative to the second-last defensive player (almost always a defender); neither the direction of the ball nor any perceived advantage are relevant.

Harsh on Mitoma, but the right decision by the VAR, Paul Tierney.

The Japan international did have a tight offside call go his way earlier, however, although this was just the VAR confirming a correct onside decision by the assistant. The presence of just the single green line tells us this was a very close call and only onside by the tolerance level applied to VAR offside in the Premier League. 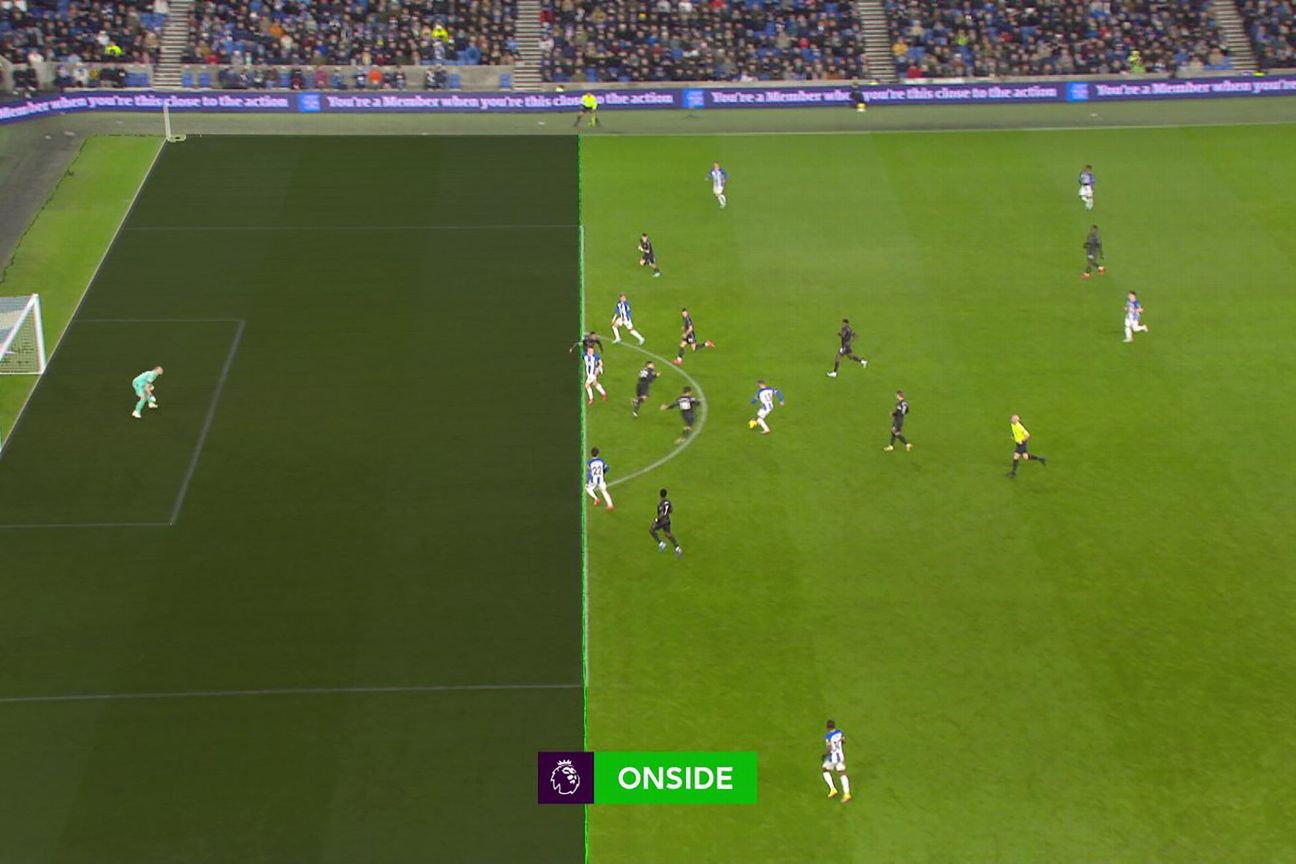 What happened: Referee Darren England offered West Ham a route back into the game in the 48th minute when he pointed to the spot for a foul by Ben Mee on Jarrod Bowen, but the foul was very close to the edge of the area. The VAR, John Brooks, needed to check the position of the foul.


VAR review: The VAR must judge a penalty on where the first contact takes place which causes the foul, and not where the attacking player may end up.

It was a quick VAR overturn for Brooks to tell the referee it was clearly outside the box.

What happened: Nottingham Forest thought they had a way back into the game in the 40th minute when a cross came in, the ball came off Ryan Yates and Willy Boly scored from close range, but there was a double VAR review for handball and offside.


VAR review: This review took far longer than necessary, as there was a clear offside against Boly as the goal scorer.

The VAR, Andy Madley, chose to apply the review in chronological order. However, it would have made more sense to first review the offense by the goal scorer, and then the rest of the attacking phase. Perhaps Madley wasn’t immediately aware that Boly was the scorer, rather than Yates.

Madley spent some time looking at various angles to see if the ball had hit the arm of Yates, and replays were inconclusive — though coincidentally he would have headed the ball onto his own arm before a teammate scored in a near carbon copy of the Mitrovic handball.

It was apparent that Yates hadn’t scored the goal, with the ball touching Boly before going into the net past David de Gea. If Madley had checked the factual decision against the goal scorer first, this would have been resolved much quicker. 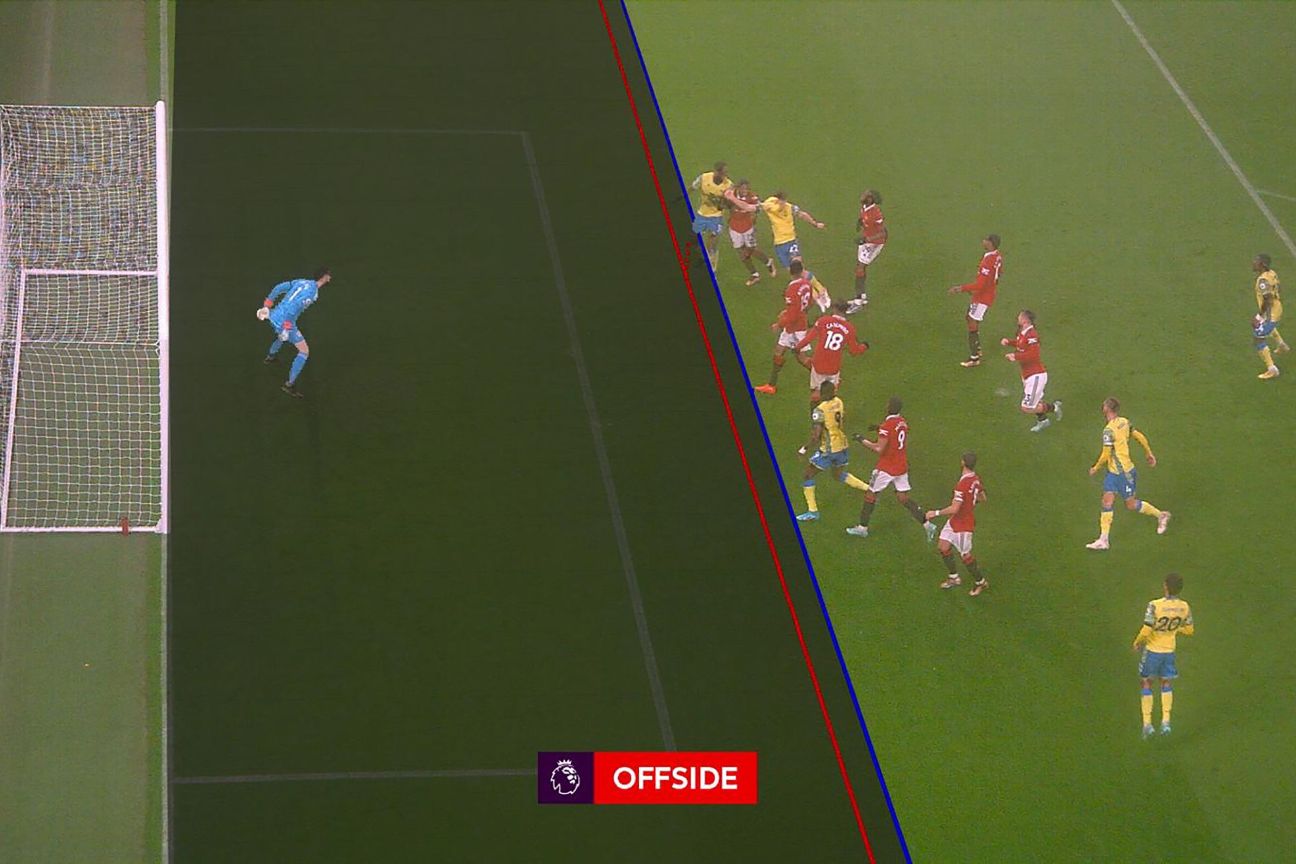 What happened: In the 24th minute, Jarrod Bowen stumbled to the ground as he broke into the area. Referee Michael Oliver pointed to the spot for a trip by Arsenal defender William Saliba.


VAR review: There was contact between Saliba and Bowen’s left leg, which caused the forward to lose his balance.

The referee’s decision to award a spot kick would not be considered clearly and obviously wrong by the VAR — but at the same time the VAR would not advise a penalty if the referee hadn’t given one.

What happened: In added time at the end of the first half, Arsenal were awarded a penalty when referee Oliver judged that the ball had hit the arm of Aaron Cresswell inside the area.


VAR review: This is what fans envisioned VAR would be used for when it first came in — the real howlers that would have been a clear injustice.

Oliver thought the ball had come off the raised left arm of Cresswell but the VAR, Darren England, could quickly identify that the ball had hit the face of the West Ham United defender.

A quick and simple VAR decision.

Information provided by the Premier League and PGMOL was used in this story.